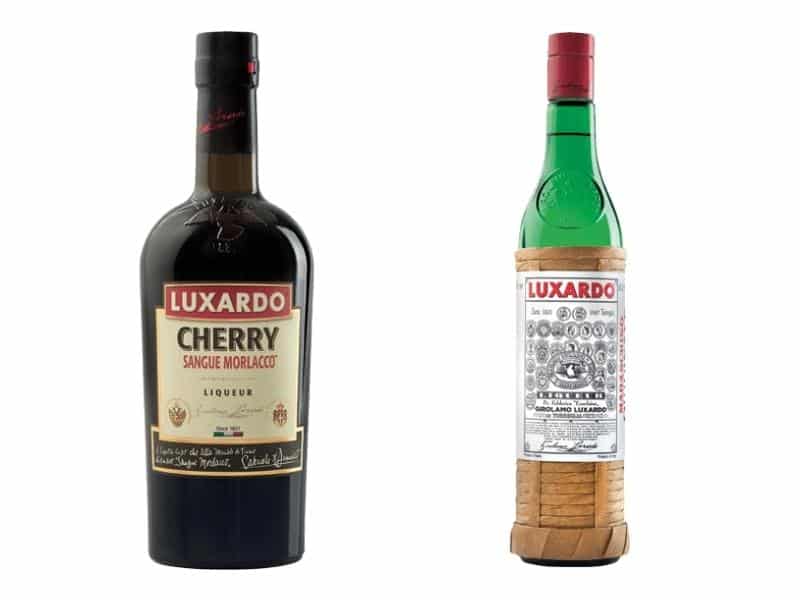 Cherry Heering is a traditional liqueur that’s made with spices, bitter almond, and Danish Stevens cherries (without the pits) that are lightly crushed with stones.

The mixture is soaked in neutral grain alcohol and then age-matured in vats for a minimum of three years. Sugar is added during the aging process.

Luxardo Maraschino Originale is one of the few distilled liqueurs available today. Luxardo is made from crushed mascara cherries (with skins and pits).

The cherries, spices, and honey are then soaked in neutral alcohol for two years before the mixture is distilled. Then, the liqueur is aged for 12-18 months.

Sugar and water are finally added to dilute the liqueur before it is bottled, shipped, and sold.

Comparison Chart: Is Cherry Heering the Same as Luxardo? 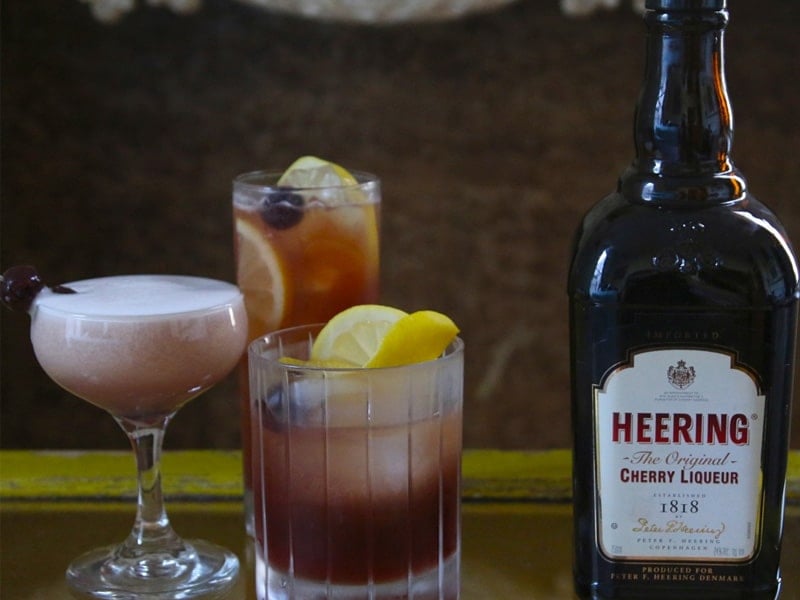 Cherry Heering is a sweet, rich, red cherry liqueur made from crushing Danish Stevens cherries with stones and then adding botanicals (herbs and spices).

The mixture then soaks in neutral grain alcohol. The liqueur is oak cask-matured for three to five years and sugar is added during the aging process.

How to Serve Cherry Heering

Cherry Heering is commonly compared to a cherry brandy because the two are enjoyed in similar forms. Serve Cherry Heering neat, on the rocks (with ice), or in a cocktail.

To make an Old Fashioned Heering, use this recipe:

Cherry Heering is also used in cooking and baking. In savory applications, use Cherry Heering in cheese fondue (as a substitute for Kirsch) or as a salad dressing.

Substitute cherry brandy with the cherry liqueur in savory red wine or cherry-based sauce recipes, as it pairs well with tenderloin, pork, and chicken.

Cherry Heering works well with balsamic vinegar to make a glaze for hams and similar proteins.

Or drizzle some of the cherry-flavored liqueur on toast with ricotta cheese, cherries, and pistachios, or over grilled or baked camembert cheese with rosemary and macerated cherries. If you don’t have ricotta, some substitutes for ricotta would also be delicious with Cherry Heering.

For Halloween, make Severed Hands with Cherry Heering and cherries for the filling and blood-and-gore component.

The cherry liqueur is ideal for making a syrup and then soaking cake layers. Add a drizzle of the liqueur over fruit or an ice cream sundae with nuts, use it as a filling for donuts or pies, or use to add flavor to whipped cream or buttercream.

Or add some Cherry Heering to an Irish Coffee for an unorthodox but delicious twist, or to a soda ice cream float with chocolate-black cherry flavors.

The liqueur was first sold in 1818 in Peter’s cellar shop that traded colonial goods in the Copenhagen harbor.

The royal, red liqueur quickly became popular on cargo ships that sailed across the world. It is still a favorite among European royalty. In 1876, the liqueur made its way to the Royal Danish Court.

Two years later, it became a staple in the Imperial Russian Court and the Court of the Prince of Wales. In 1901, the liqueur was introduced to the King of England, and ever since, Cherry Heering remains a favorite of Queen Elizabeth II.

Price and Where to Buy Cherry Heering

The price for a 750 ml bottle of Cherry Heering retails at $26.99 to $32.99. Buy the royal cherry liqueur at your local liquor store or order online from:

According to MyFitnessPal, 1 ounce of Cherry Heering has 80 calories and 10 grams in carbohydrates or sugar. 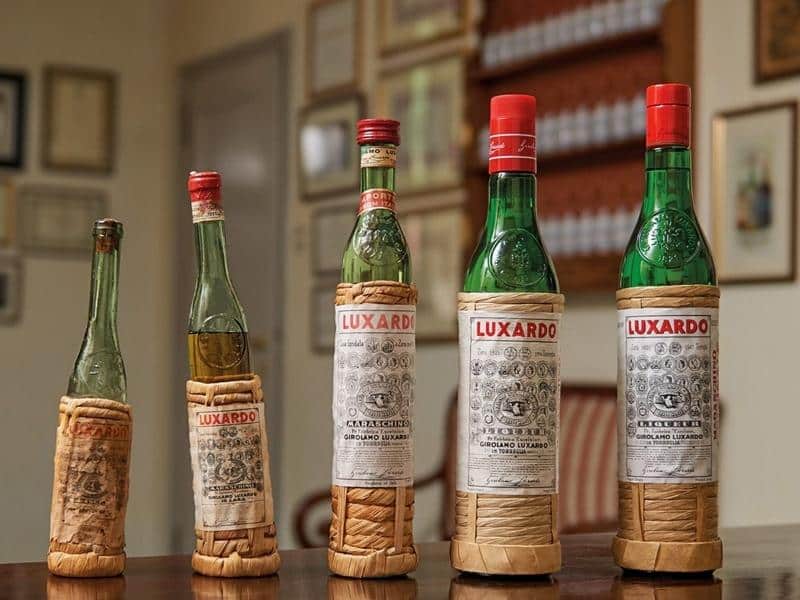 Luxardo Maraschino Liqueur is a cherry-flavored liqueur made from sour, pitted marasca cherries, honey, and botanicals that are soaked in neutral alcohol in larchwood vats for two years.

The mixture is then distilled in small copper pots and aged in Finnish ash wood vats for 12-18 months. The last step is to add water and sugar to dilute the liqueur before bottling.

How to Serve Luxardo

Serve Luxardo Maraschino Originale neat, as a cordial, on the rocks, or in a cocktail.

To make a Hemingway Special, also called a Hemingway Daiquiri or Papa Doble, use this recipe:

You can also serve the Hemingway Daiquiri with crushed ice for a more authentic Cuban feel.

For savory recipes, use Luxardo Maraschino Liqueur in a cherry or red wine-based glaze, salsa, or sauce for ham, lamb chops, or pork loins.

Add Luxardo to a balsamic-based salad dressing or a cherry chipotle chili. Drizzle Luxardo over grilled toast with ricotta and cherry salsa, or a salad with beets, cherries, feta, and olives.

You can also add a splash of Luxardo to your cherry jams or preserves or make sauces to dip fruit, cookies, or donuts into.

Luxardo flavors buttercream well, which can be used as a frosting for cakes and cupcakes. Alternatively, drizzle Luxardo liqueur over ice cream, a cherry compote and honey yogurt, pancakes, or waffles.

You can add Luxardo to an adult version of a cherry slushy, in a spiced cherry spritz, or cherry-bourbon ice cream.

In 1821 in Zara, a Venetian city located on the Dalmatian coast (modern-day Croatia), Girolamo Luxardo founded a distillery.

It took Girolamo eight years to perfect his recipe to recreate Rosolio Maraschino liqueur, a blend of rose, cherry distillate, and sugar that has been produced in Dalmatia since the 18th century.

Girolamo needed to know his recipe was a success, and he won the ultimate “seal of approval” when the Emperor of Austria himself said the product was of superior quality.

The bombing of Zara during World War II hampered the production of liqueur. The surviving Luxardo family members escaped to Italy and brought with them a sampling of the marasca cherry.

In 1947, Giorgio Luxardo and Nicolò III built a distillery in Torreglia in north-eastern Italy.

Initially, the straw encasing was meant to protect the bottles during transportation. Nowadays, the hand-plaited straw is part of the signature Luxardo Maraschino Originale look.

Price and Where to Buy Luxardo

Luxardo Maraschino Originale retails for $32.99 to $37.99. Buy the distilled liqueur from your local liquor store or online at:

According to fatsecret, a 1-ounce serving of Luxardo liqueur has 73 calories, 9 grams of carbohydrates, and 8 grams of sugar.

Luxardo Maraschino Originale and Cherry Heering are liqueurs that use all-natural ingredients with cherries as the main ingredient.

Cherry Heering is more like a cherry brandy and rich red (but sweeter), while Luxardo is a clear, distilled liquor that is more kirsch-like.

When making Luxardo, the whole marasca cherry, including the pit, is used. No cherry pits are used when making Cherry Heering from Stevens cherries.