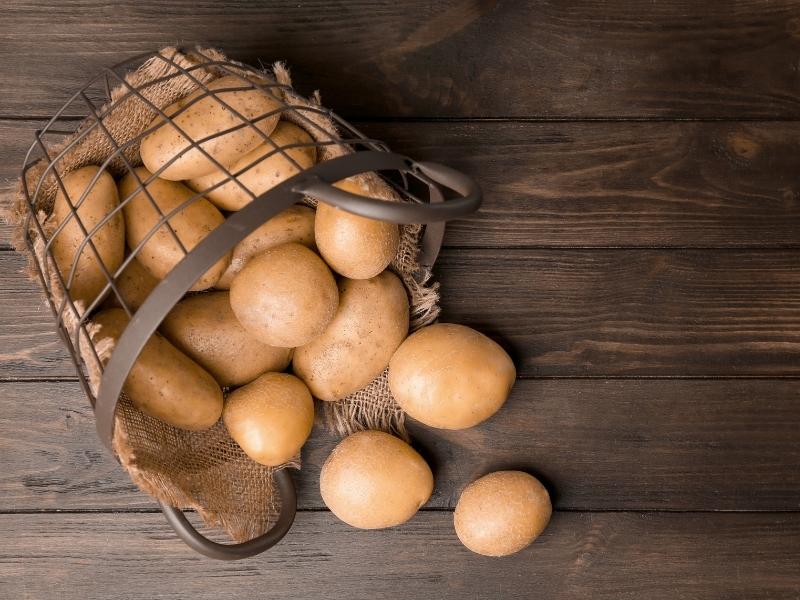 Yes, potatoes go bad because exposure to light, air, and humidity cause potatoes to deteriorate and eventually rot.

How Long Do Raw Potatoes Last? 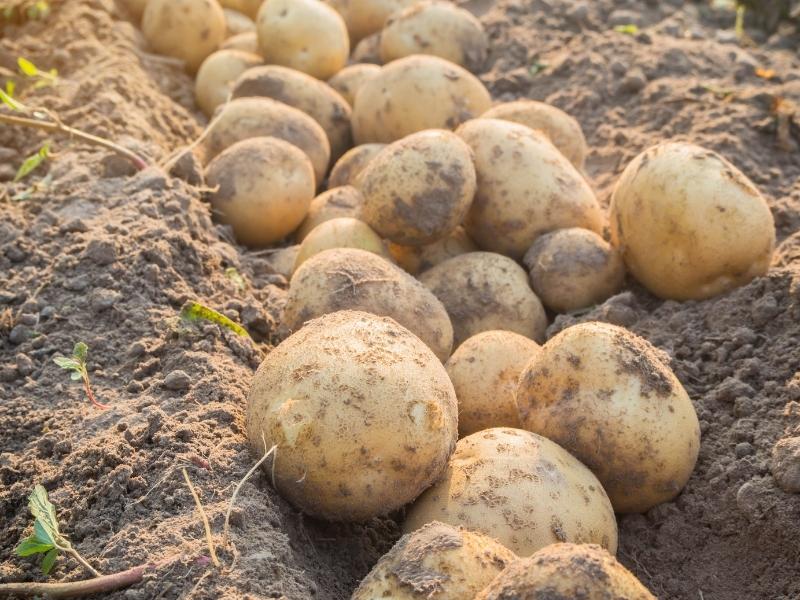 Raw potatoes last for about one week when stored in a basket on the kitchen counter, but can last for two to three months when stored correctly.

Potatoes that are exposed to light and air deteriorate quickly because gasses in the atmosphere and natural light react with certain chemical components in potatoes and make the potatoes sprout.

Fresh potatoes have little indentations, known as eyes, on their skin. These eyes are harmless in fresh potatoes but after a few days, the potatoes begin to sprout from the eyes.

Glycoalkaloid toxins like solanine can develop in uncooked potatoes exposed to light, making the potatoes unsafe to eat. Solanine poisoning — a type of food poisoning — causes many potentially dangerous symptoms, such as nausea, vomiting, stomach cramps, and diarrhea.

A cool, dry, dark place like an aerated kitchen cabinet, pantry, or cellar is the ideal environment for storing potatoes. Place raw potatoes in an open cardboard box, an uncovered bowl, an open basket, or a mesh bag, so that cool air can circulate around the potatoes.

Don’t wash raw potatoes before storing them. The potatoes absorb extra moisture during the washing process, resulting in soft potatoes. Only wash the potatoes immediately before using them.

Avoid storing raw potatoes in the fridge or freezer because the temperature in the fridge is too low and turns the potatoes brown and soft. The natural water in frozen potatoes forms ice crystals, resulting in bad potatoes.

Red potatoes have a higher natural sugar content than average potatoes. The sugar in red potatoes interacts with chemicals in the atmosphere, causing red potatoes to spoil more quickly than other fresh potatoes.

Prolong the shelf life of red potatoes by storing them in a cool, dark, dry place.

Russet potatoes have the same shelf life as other popular white potatoes. Russet potatoes will last longer when stored in a cool, dark, dry place — and not out in the open. 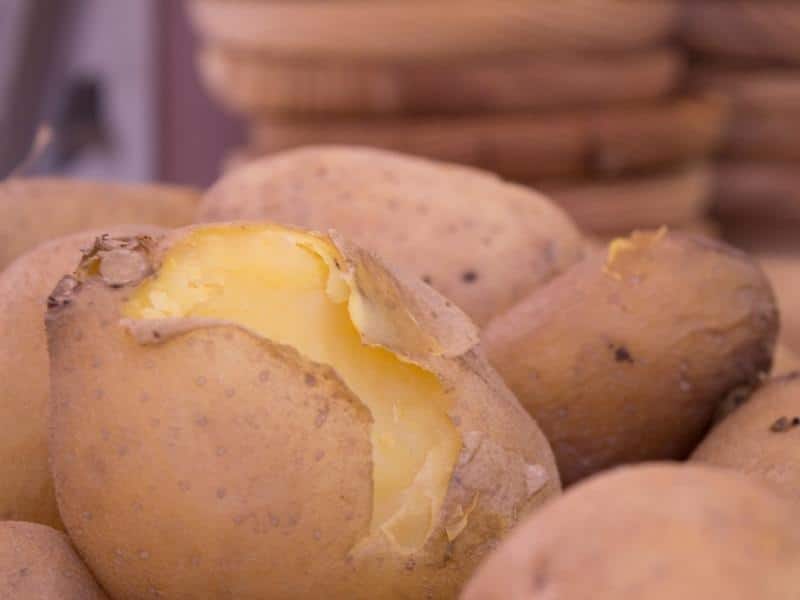 Bacteria multiply quickly in cooked potatoes at room temperature, causing the potatoes to spoil after two to three hours.

Adding certain ingredients to cooked potatoes can lengthen or shorten the potatoes’ lifespan. For example, pouring a vinaigrette dressing on potato salad prolongs the fridge life of cooked potatoes to up to six days because the vinegar in the dressing acts as a natural preservative.

Adding butter, cream, or milk to mashed potatoes makes the mashed potatoes spoil sooner because dairy products have a limited fridge life. The same rule applies to potatoes that have been cooked in a cheese sauce.

How to Tell if Potatoes Are Bad 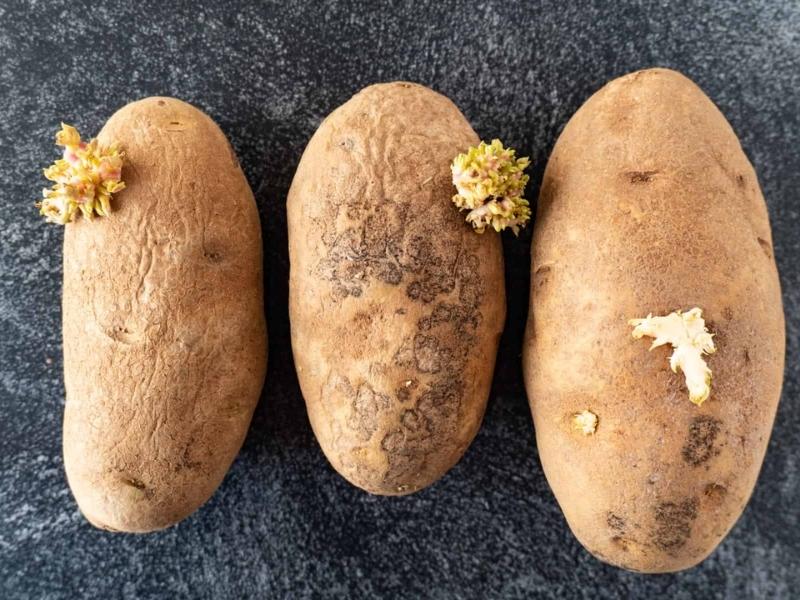 There are different ways to tell if raw and cooked potatoes have gone bad. Eating bad potatoes can cause mild to severe food poisoning, with symptoms like stomach cramps, nausea, vomiting, and diarrhea.

These are the most common ways to tell if raw potatoes have gone bad:

How to Tell if Cooked Potatoes Are Bad

These are the signs that cooked potatoes have gone bad: 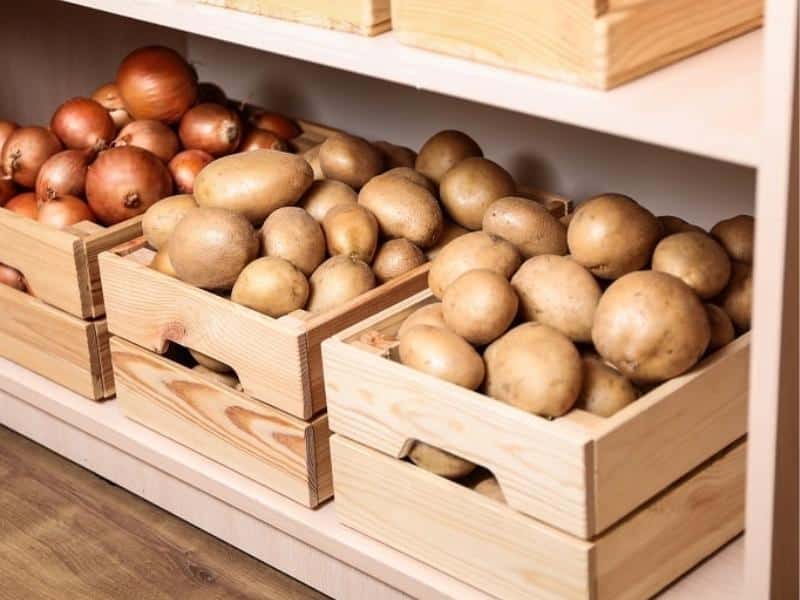 The best way to store raw potatoes is to wipe off any visible dirt with a clean, dry kitchen towel and place the potatoes in an open container or cardboard box in a cool, dark, dry place. Don’t put the potatoes in a sealed bag or sealed container.

Avoid storing cooked potatoes in the same container as other foods because other foods can transfer bacteria, causing the potatoes to spoil sooner.