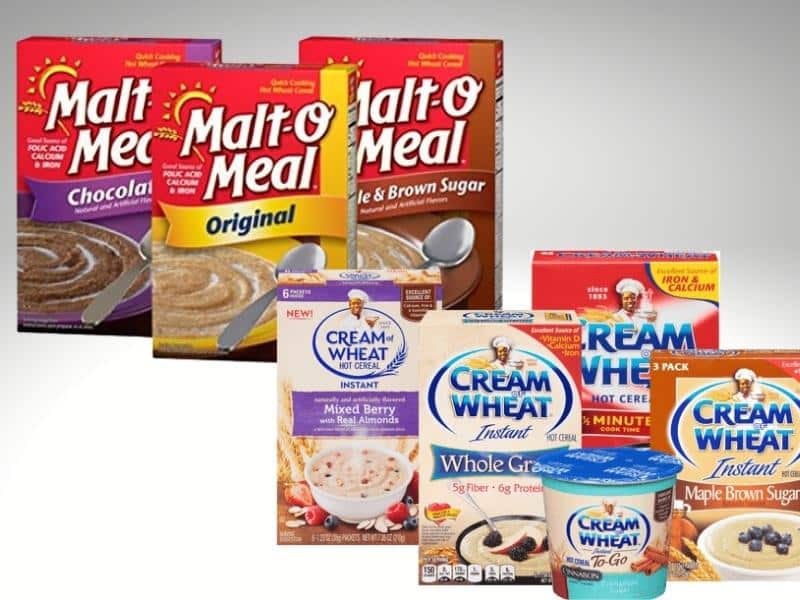 The main difference between Malt-O-Meal and Cream of Wheat is the texture of the cereal. Cream of wheat is smooth, whereas Malt-O-Meal has a coarse, grainy texture.

Malt-O-Meal and Cream of Wheat are nutrient-rich hot cereal options with wheat as the main ingredient.
The addition of malt flavoring gives Malt-O-Meal its distinctive taste and aroma, whereas Cream of Wheat is neither sweet nor bitter but plain in flavor.

Comparison Chart: Is Malt-O-Meal the Same as Cream of Wheat? 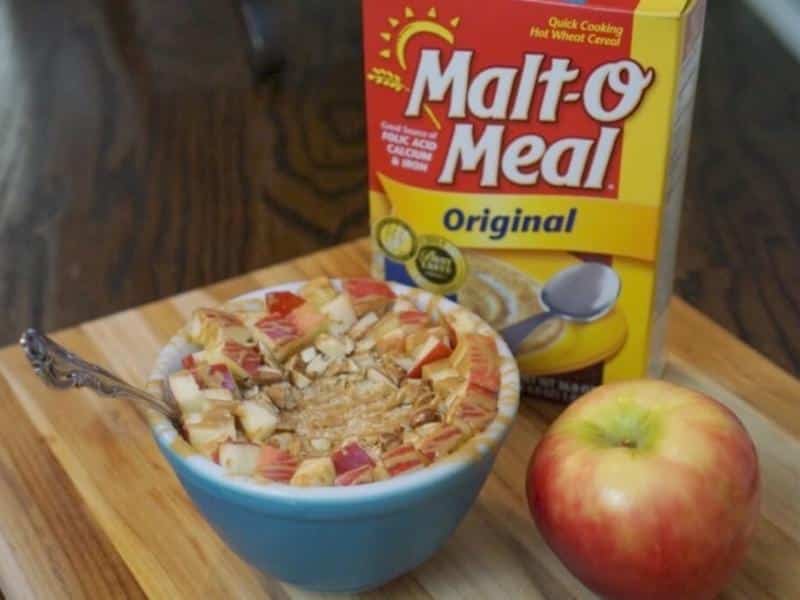 Malt-O-Meal is a breakfast grain cereal produced by Malt-O-Meal Company. It’s a wheat-based cereal known for its coarse texture and sweet malt flavor, often made into a hot porridge or gruel.

Other vital ingredients include:

The essence of Malt-O-Meal is the malted barley flour, which is produced by cooking and drying malted barley.

In its final form, malt flour contains proteins and carbohydrates from the original barley grain.

How to Cook, Serve, and Eat Malt-O-Meal

Preparing Malt-O-Meal is a straightforward process. You’ll need the following ingredients for a single serving:

Malt-O-Meal dates back to 1919 when John Campbell founded the Campbell Cereal Company.

The company produced both hot and cold cereals for mass production and retail distribution.

John Campbell’s recipe became the foundation of what would later become Malt-O-Meal.

Campbell Cereal Company changed its name to Malt-O-Meal Company in 1927, and later in 2015 changed to Post Consumer Brands with headquarters in Lakeville, Minnesota.

Malt-O-Meal is produced in NorthField, Minnesota.

Price and Where to Buy

The average price of Malt-O-Meal cereal falls within $0.12–$0.40 per ounce. Prices for products vary by store, location, and availability.

You can buy Malt-O-Meal at any local grocery store or online on Amazon.

The availability of the cereal also depends on its shelf life. Make sure to check the expiration date on the package before purchasing.

Malt-O-Meal is a healthy breakfast option for people of all ages. It’s an excellent source of potassium, vitamin B6, carbohydrates, folate, and iron.

Malt-O-Meal also contains about 43 calories per 1-tablespoon dry serving, and is  considered low in cholesterol, sodium, and sugar. 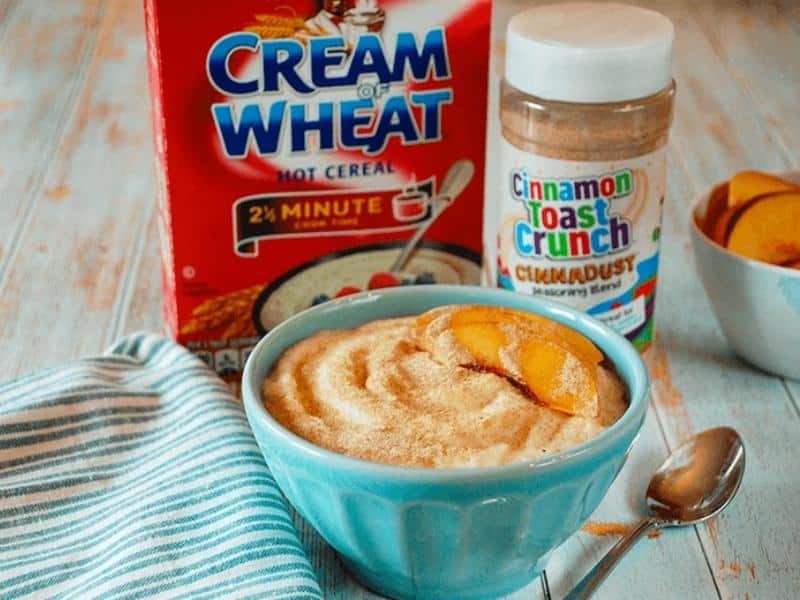 Cream of Wheat is a wheat-based breakfast cereal made from ground, hard wheat grain endosperm, milled into a smooth powder.

It has a unique creamy, porridge-like consistency, unlike other breakfast cereal products.

How to Cook, Serve, and Eat Cream of Wheat

Preparing a bowl of Cream of Wheat is easy. You can use water or milk, depending on your preference and taste. Many people prefer milk because it gives the cereal a richer and sweeter flavor.

The following ingredients will make a single serving:

There are two ways to prepare Cream of Wheat. In the first method you can use either water or milk, while in the second method you can choose to mix water and milk (half a cup for each).

Many people prefer mixing water and milk because it gives the desired balance in flavor and consistency. Using water alone maintains the bland taste of the Cream of Wheat.

Cream of Wheat with Water or Milk

The first method is made with your choice of water or milk. In a pot or pan,  combine 1 cup of water or 1 cup of milk with 3 tablespoons Cream of Wheat.

Bring the mixture to a boil while stirring constantly. Simmer the mixture for 2 minutes until it thickens, then serve.

Cream of Wheat with Mixed Water and Milk

The second method is made with a mixture of water and milk. Mix 1/2 cup of water with 1/2 cup of milk and bring the mixture to a boil.

Gradually add the 3 tablespoons of Cream of Wheat while constantly stirring until the mixture becomes thick and creamy.

Allow the Cream of Wheat to simmer for 2 minutes to achieve a porridge-like consistency.

Both methods yield a creamy texture and smooth consistency. The porridge-like consistency of Cream of Wheat makes this cereal a popular choice for breakfast.

Enjoy Cream of Wheat in winter months for a warming, nourishing meal.

History of Cream of Wheat

Cream of Wheat is an American product commonly associated with the North Dakota region, where it was invented.

The product made its debut in the American market in Chicago, Illinois, during the Columbian exposition of 1893.

Cream of Wheat traces back to the Diamond Milling Company, located in Grand Forks, North Dakota.

When the company faced a reduced demand for flour during the 1893 famine, the head miller at the time came up with a brilliant idea to help solve the slowing demand.

He proposed a recipe made with the mill’s flour and used by his wife to prepare porridge.

The company sent samples of its new cereal to distributors, and orders started flowing in.

Diamond Millers then directed its factories to produce Cream of Wheat as its primary product, leading to tremendous success.

Price and Where to Buy

The average price of Cream of Wheat falls within the range of $0.14 to $0.30 per ounce. Prices for products vary by store, location, and availability.

Cream of Wheat is available at most grocery stores and online on Amazon.

Make sure to check the expiration date on the package before purchasing. Look out for discounts and coupons to get a better deal on prices.

Cream of Wheat is a healthy and nutritious part of any diet. It’s rich in iron, and essential B vitamins such as B1 (thiamin), B2 (riboflavin), B3 (niacin), and B6 (pyridoxine).

Cream of Wheat is also rich in selenium, a vital antioxidant mineral.

Cream of Wheat is noted for its rich source of plant-based iron, and can be a good option for those with irritable bowel syndrome due to its easy digestibility.

Choosing Cream of Wheat vs. Malt-O-Meal

Malt-O-Meal and Cream of Wheat are breakfast cereals with wheat as the main ingredient, and they differ slightly in taste and texture.

Malt-O-Meal is a malt-flavored, coarse-textured cereal, while Cream of Wheat is a flavorless, smooth, creamy porridge.

Other similar foods used as alternatives to Cream of Wheat and Malt-O-Meal include oatmeal, cornmeal, cream of rice, and organic cornflakes.