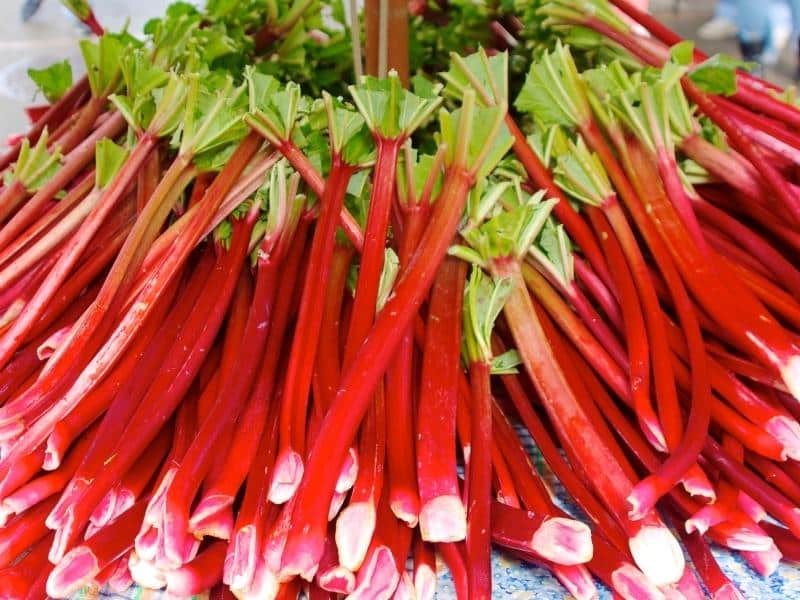 Rhubarb tastes like crispy Granny Smith apples combined with fresh celery. The fruit is 95% water, yet has a distinct and intense sour flavor that leaves your taste buds with a lingering, refreshingly clean tartness.

Rhubarb is a perennial from the Polygonaceae or buckwheat family, with broad leaves and edible, fleshy stalks and leaf ribs. Rhubarb originated in Asia, where the plant was used for medicinal purposes 4,600 years ago. Rhubarb is still traditionally used for digestive issues.

Rhubarb stalks are typically yellow-green or red-purple, and range in size. The size of the stalk determines its flavor better than the stalk’s color does. Larger stalks of 10 inches or longer are packed with more distinctive flavors than short stalks are.

Rhubarb leaves aren’t edible, as they contain high amounts of oxalic acid, which is toxic to humans in certain quantities. For example, the leaves are toxic to someone who weighs 145 pounds and eats 11 pounds of Rhubarb leaves.

The Nutritional Benefits of 1 Cup of Rhubarb Include: A few different types of rhubarb exist. Rhubarb is typically categorized into green or red stalks. Light pink stalks or those with yellow speckles and tinges further categorize varieties of green-stalk rhubarb.

How to Cook With Rhubarb Prepare rhubarb before using it in a dish by cutting away all the leaves, and chop away one inch from both ends of the stalk. Peel away the stringy, outer fibers before rinsing the stalks under cold water. Cut the stalks in 1- to 2-inch pieces across, depending on the recipe used. 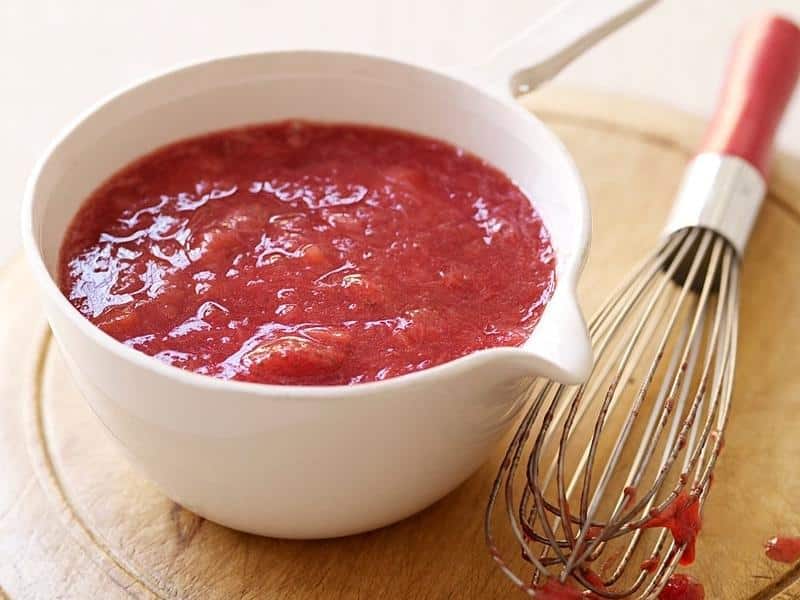 Rhubarb sauce is tart and sweet simultaneously. Rhubarb sauce tastes excellent on its own, or used to top ice cream or pancakes, or as a dip or basting for roast meat.

Pour the diced rhubarb, water, vanilla extract, salt, and sugar in a heavy-based saucepan. Caramelize the ingredients over high heat for five to 10 minutes while stirring. Remove the rhubarb sauce from the heat and let it cool before storing it in an airtight container in the fridge. 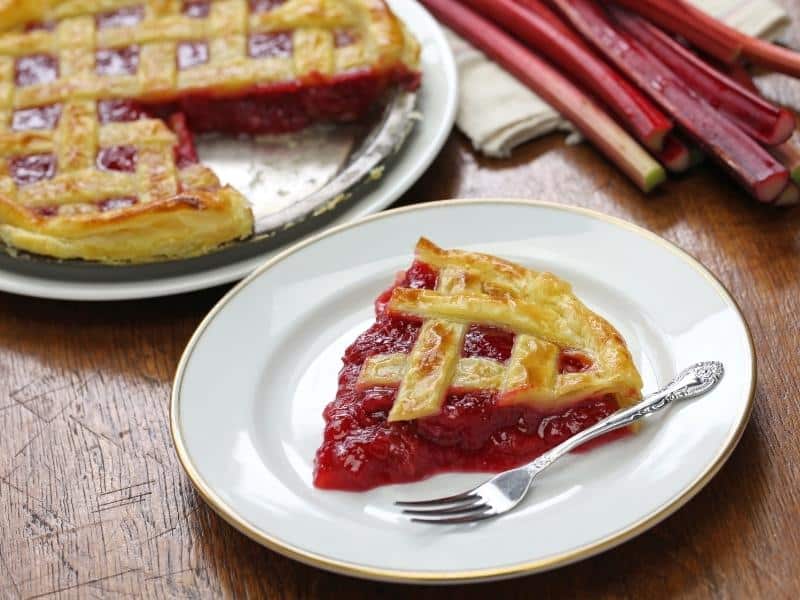 Rhubarb pie tastes as tantalizingly sweet and sour as apple crumble. It isn’t complicated to make. Use one of the sweeter rhubarb variants to make the pie unless a tangy, tart flavor is desirable.

Top the pie with the crust and bake for 15 minutes on the lowest oven rack. Reduce the oven temperature to 350°F and bake the pie for another 45 minutes. Serve the pie warm or cold. 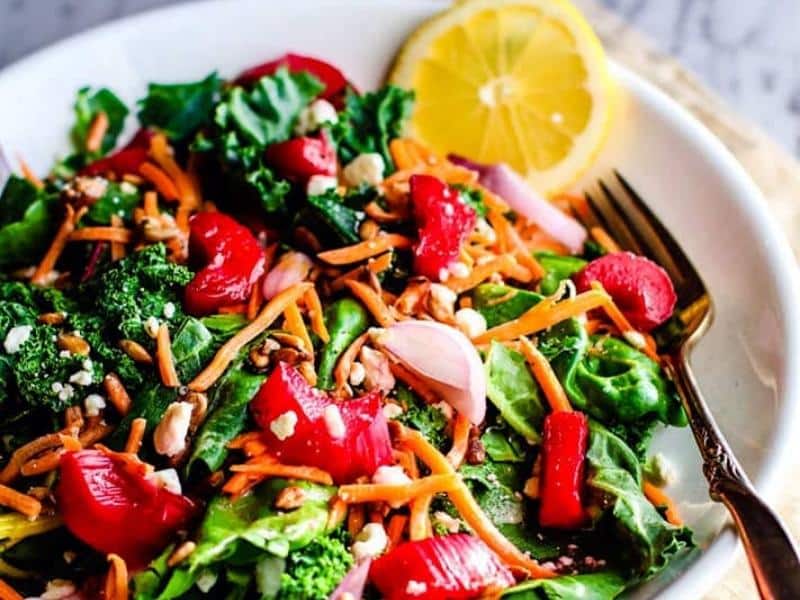 Rhubarb salad is a tasty and colorful alternative to apple salad. Rhubarb brings the same tart flavors as Granny Smith apples while adding a bright crimson color to the bowl. A honey-roasted salad is ideal with not-too-sweet rhubarb stalks.

Preheat an oven to 450°F before lining a baking tray with parchment paper. Toss the chopped rhubarb in a bowl with honey and balsamic vinegar. Roast the coated rhubarb in the oven for 10 minutes. Rinse your spinach or kale before mixing it with the onion and carrots.

Add the roasted rhubarb to the mixed veggies and combine well in a serving bowl. Top the salad with dried cranberries, cottage cheese, sunflower seeds, salt, and pepper before adding salad dressing. 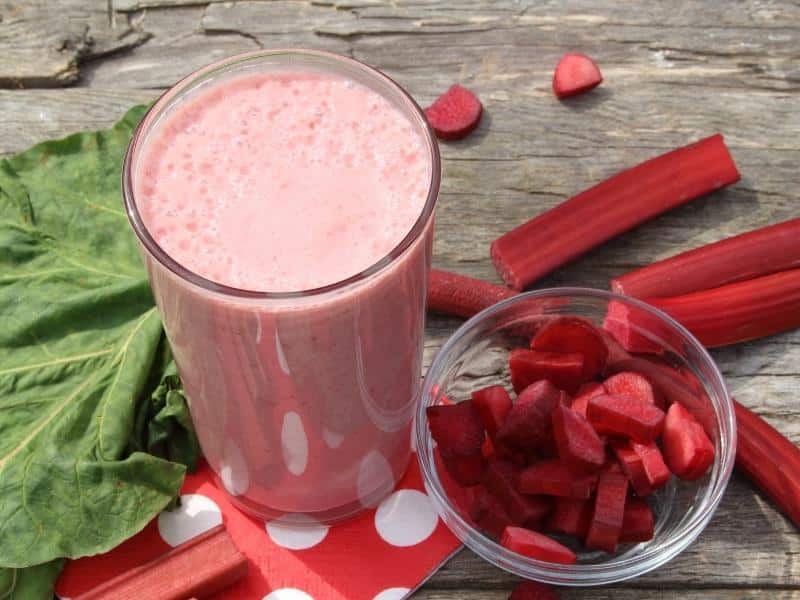 Rhubarb’s unusual taste makes this herby vegetable an exotic addition to smoothies, and serves as a great substitute for Granny Smith apples, cranberries, or other sour fruits in tart smoothies. Blueberry rhubarb smoothies are ideal for exotic styles with homey flavors.

Blend the rhubarb, blueberries, yogurt, maple syrup, and strawberries in a smoothie maker until the fruit becomes a deep purple-red smoothie. Add one tablespoon of maple syrup if the smoothie is too sweet, or remove one tablespoon next time you make it.

Substitute the yogurt with coconut milk for an exotic twist. 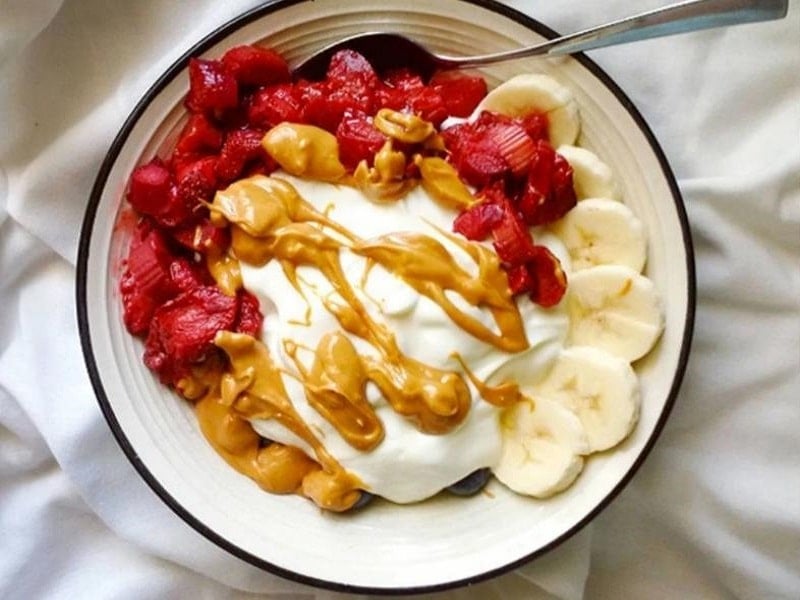 Rhubarb is a crunchy, tart snack that pairs well with sweet sauces and dips. Dipping rhubarb in honey or maple syrup makes for a healthy, crunchy snack. Rhubarb and peanut butter are a surprisingly amazing combo.

Combine the honey, yogurt, and peanut butter in a bowl. Blend the ingredients together until a dipping paste forms. Place the dip in a serving bowl with the stalks circling around it. Dunk the stalks in the peanut butter dip for a glorious snack. 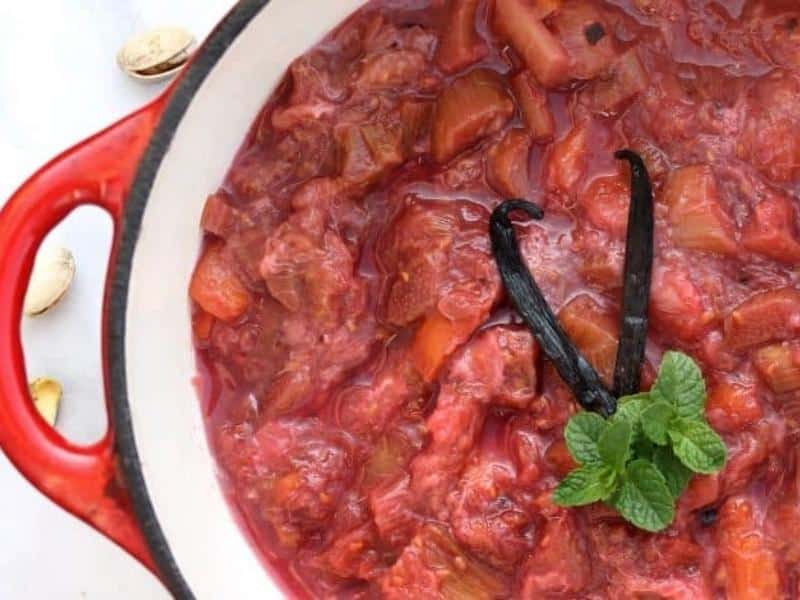 Combine the chopped rhubarb, water, optional cinnamon, and sugar in a heavy-based saucepan over a low to medium heat. Simmer the rhubarb for 15 minutes until the sugar dissolves and the fruit breaks down. Remove the rhubarb from the heat and let it cool.

Serve over your choice of sweet food, or eat as-is.

Always buy healthy-looking rhubarb stalks without wilted leaves. The best are found in spring and early summer, because the fruit changes flavor by the end of summer.

Save rhubarb for two to four weeks in the fridge by cutting the leaves away and loosely wrapping the rhubarb stalks in tin foil, lightly crimped closed. Or, chop rhubarb stalks and freeze them in a ziploc bag to keep them fresh for three months.