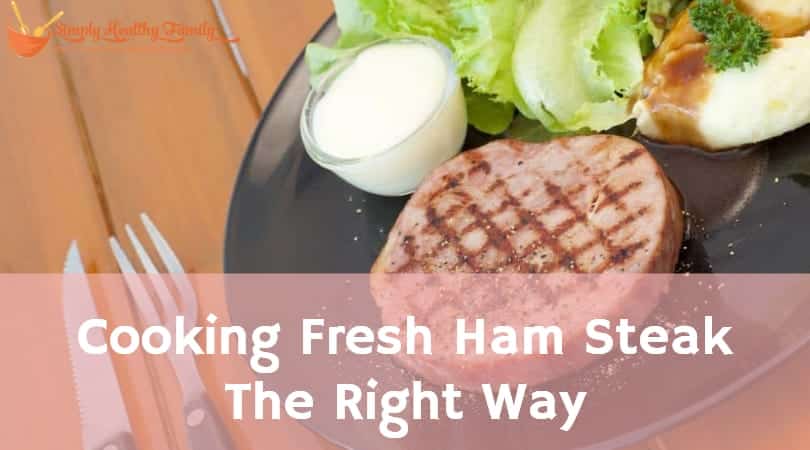 If you’re looking for something that is easy to prepare for dinner or lunch with friends and family, you might want to consider a ham steak. It’s quite inexpensive to get one, and you can do wonders with it, making a tasty, high-energy meal that everyone will love.

In this article, we will teach you how to cook fresh ham steak and offer some of our favorite recipes. But before we can get to that, we have to talk about something else first.

How To Get The Best Ham Steak

Before you can cook a fresh ham steak, you need to buy one. However, buying just any piece of ham or ham steak won’t do – you need to get it right. Otherwise, the dish you’re trying to make will most likely be bad because of it. But how do you get the right ham steak?

Well, there are a few tips and trick we can share with you, and they will almost certainly help you choose the best ham steak available.

For starters, you should know that there are two ways in which you can get a ham steak.

The first one is to simply buy an entire ham and slice off a fresh ham steak from it. The second one is to simply buy a prepackaged ham steak or ask the butcher to cut one off for you. Of course, the second method is far easier and less costly if you want to prepare one meal. But if you want a whole ham that you can use for multiple meals, the other method is better.

Either way, one of the first things you should look at when buying a ham steak is the type of ham it’s sliced off from. This greatly impacts the taste and preparation process of the ham steak.

Country hams are usually dry cured, and they have quite a strong flavor. You can find both smoked and un-smoked varieties, but they are always raw and need to be cooked before eating.

City hams are cured with water, so they have a less intense flavor. Depending on the amount of water that’s added to it, the flavor and nutritional content changes. Generally speaking – the less water is added, the better the ham.

Partly cooked hams are cured with smoke and heat, to kill germs and parasites. They can be eaten straight away in some instances, but it’s usually best to cook them before eating.

Fully cooked hams are just what the name says – hams that can be eaten straight away and don’t need to be specially prepared. You can heat them up if you want, but that’s about it.

Boneless hams are processed and shaped into an oval – they are usually the best for ham steaks since they are easy to cut. However, they can taste a bit bland at times. But if you want to cut your own steak and don’t know how, you should buy one of these. Otherwise, choose a ham with some bone in it, since they just taste better.

Of course, there are a few other things you should consider, such as the thickness of the steak – if it is more than ½-inch thick, it can be difficult to cook or fry. However, if it’s thinner than 1/4-inch, it might burn too easily. You should also look at the expiration date when you’re buying a prepackaged ham steak – if it’s less than a week away, don’t buy it.

Now that you know the basics of buying a ham let’s get you ready to cook it!

There are many different ways to cook a fresh ham steak, but we can’t cover them all since it would take too much time. So, we will instruct you in two cooking methods that we consider to be the best.

First up is a simple method – frying the stake in a pan on the stove.

To start with, you should trim the edges of the steak with a sharp knife and remove most, but not all of the fat from them. Cut some slits into it at every inch.

Put one tablespoon of oil into the pan and preheat it over medium-high heat. Don’t use oil if the steak is extremely fatty – you won’t need it.

If you’re using any seasonings for the steak, rub them into it at this time. We like to use plenty of ginger for example. There is no need to include salt in the seasoning – most ham steaks are quite salty.

You can now put the steak in the pan and fry it until it is completely cooked on the center but not burned on the edges. You should turn it frequently, every minute or two. Each side needs to cook for at least seven or eight minutes until both sides are browned, and the fat on the edges turns transparent. Of course, if the ham is thicker it will take longer to cook.

Once the internal temperature is 160 degrees Fahrenheit, it is done. If it’s not, return it to the pan and cook it until it is.

When it’s done, you can trim the fat off the edges if you want it to look better or leave it on if you like the taste of it.

Well, that’s the first method done! But here’s another method to cook ham steak – by grilling it. It might seem difficult, but it’s quite quick and easy.

As the first step, you have to create a marinade for your ham steak. There are many ways to create one, but pineapple juice mixed with some mustard or brown sugar is the most popular. Orange or lime juice can be used as well.

After that, you should let your steak marinate in it for several hours or the entire night. You should put it in your refrigerator, of course.

Remove the steak from the fridge around 30 minutes or an hour before grilling it so it can get back to room temperature. Trim the fat from it after it gets warm enough.

Heat your grill of choice to medium-high heat and place the ham on it. Make sure to leave plenty of space between the steaks and keep them away from the coals if you’re using an outdoor grill.

When it’s done, remove the steak and let it sit for a few minutes. Then you can add more marinade to it if you wish and serve it.

There you have it! Two great ways to cook your fresh ham steak!

There are, of course, many other methods for cooking a ham steak, but these are the ones we consider to be the best. In our opinion, these methods bring out the most flavor and texture out of a ham steak. If you like some other methods better, please, feel free to share them in the comments. Also, share this article if you liked it and thought others would find it useful.

That’s all for now, and we hope you have some delicious ham steak for dinner tonight!