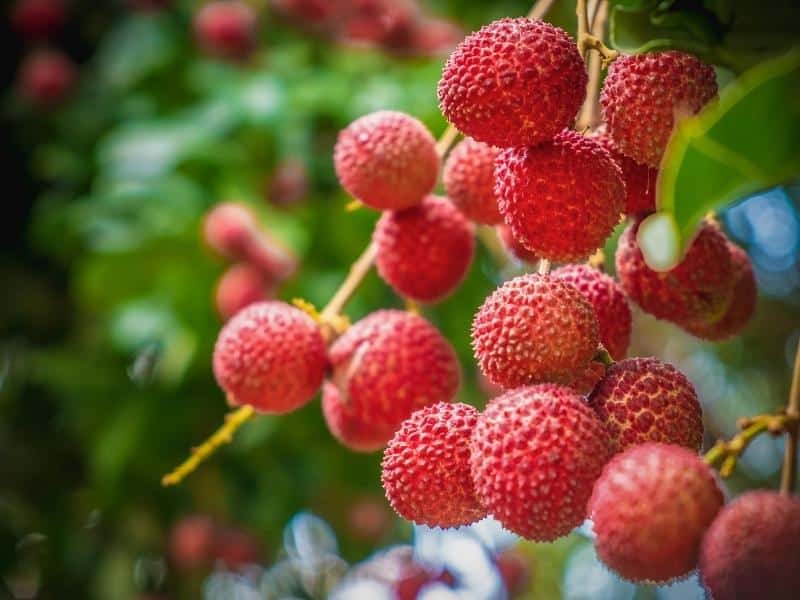 Lychee is a sweet and juicy tropical fruit with a unique appearance. The fruit is native to the southeastern and southwestern provinces of China, where it was cultivated for almost a millennium. Lychee also grows well in the warmer regions of the United States, including Hawaii.

Fresh lychee can be found in large grocery stores across the US, and it’s often sold canned, and easily found in the canned goods aisle in many stores. Canned and dried lychee is often sold in Asian supermarkets. 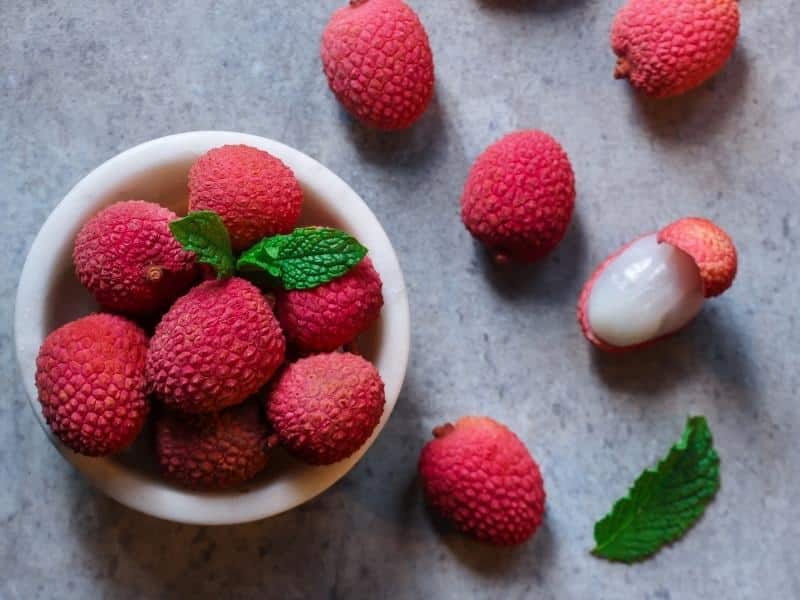 Lychee is a small fruit that grows on the evergreen tree, called Litchi chinensis. The fruits have bright red or pink skin covered in small bumps. Lychee usually has an oval shape, but it can also be rounded or heart-shaped. Lychee can measure up to 2 inches in length and 1.5 inches in width. Some say that lychee looks like a big raspberry or strawberry because of its colors and form.

On the inside, lychee has translucent white flesh, which is the edible part of the fruit. In the middle of the flesh, there is a solid brown, toxic seed.

Several tropical fruits look like lychee. Rambutan also has red skin and white flesh, similar to a lychee, but its skin has soft green or orange hairs, which lychee doesn’t have. Rambutan has a buttery flavor compared to the tartness and freshness of lychee.

Longan is another tropical fruit from the same family as lychee. Longan has a skin of a similar texture to lychee, but longan fruits have light brown or sand-colored, rather than red, skin, and the fruits are smaller than lychees.

Mangosteen has a similar structure to a lychee, with firm skin surrounding soft white flesh. However, a mangosteen’s skin is smoother than lychee, and dark purple instead of red. The texture of mangosteen on the inside is not jelly-like, like a lychee, but creamy and soft.

The taste of lychee is sweet, balanced by a gentle tartness. Lychee has notes of strawberry, watermelon, pear, and grape. When underripe, lychee has more sour and citrusy notes. Many tropical fruits have a taste similar to lychee, including rambutan, mangosteen, and passion fruit.

Lychee fruit is firm, delicate, juicy, and similar in texture to a ripe grape. Its scent is reminiscent of roses and can be described as floral.

How to Eat Lychee 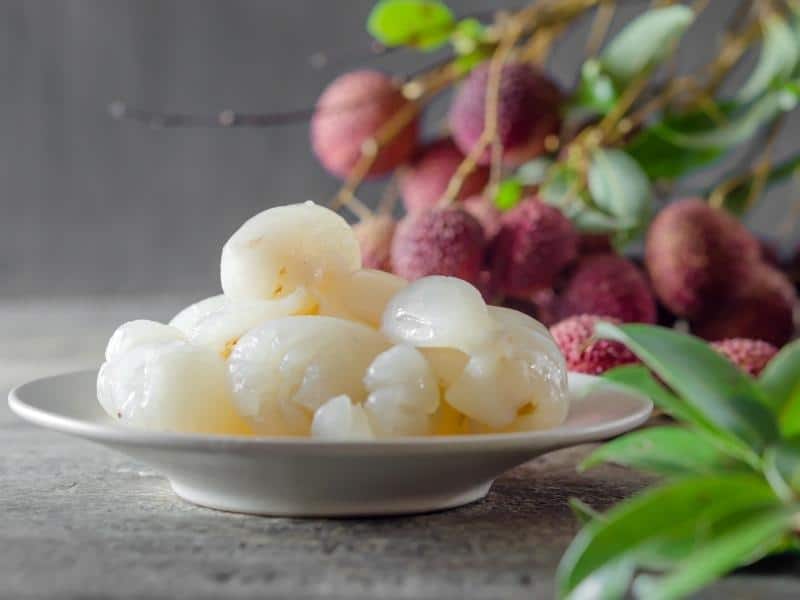 The skin of ripe lychee fruit is easy to peel and can be removed without effort using a knife or your fingers. Because the fruit is so delicate on the inside, be careful when removing the skin to avoid squishing the flesh. After removing the skin, eat the white flesh in one bite and spit out the seed, or, cut the fruit in half and remove the seed before enjoying the fruit.

Ripe lychee’s reddish skin should give in slightly but feel firm when touched. Underripe lychee has greenish or yellowish skin that shouldn’t be eaten, and an overripe fruit has cracks and brown spots on the skin. If the fruit smells fermented — sour, tangy, or vinegar-like — it’s likely overripe and shouldn’t be eaten.

Lychee has many health benefits and is rich in antioxidants and vitamins. In general, a daily fruit intake of 1.5-2 cups increases resistance to heart disease and stroke.

Lychee is rich in vitamin C. A 100-gram serving of lychee contains over 71 milligrams of vitamin C, which almost meets the recommended daily intake for an adult. The lychee fruit also has polyphenol, known as oligonol, which acts as an effective antioxidant and has been found to aid weight loss.

However, lychee can cause unusual allergic reactions in some people, with reported symptoms including itching, inflammation in the mouth, and rash.

Ways to Use Lychee: Cooking & Cocktails

Lychee is a popular ingredient in many sweet dishes and cocktails thanks to the fruit’s delicate floral scent and balanced sweetness.

Lychee can be a great addition to a fruit salad or as a topping for yogurt or porridge. Peel and cut the lychee into small pieces and add it to these foods to enhance the flavors and add sweetness to regular breakfast dishes.

Lychee is commonly used in Asian cuisines as an addition to savory dishes. Lychee juice can another dimension of flavor to a vegetable or meat stir-fry, or be used as a sauce with other savory dishes, like dumplings.

The lychee fruit is a common sorbet flavor and ingredient in ice creams, used on its own or mixed with other ingredients, like lime or ginger, to bring out more of the fruit’s unique floral flavors.

Because of its strong scent and unusual taste, lychee is used in a variety of alcoholic cocktails. Lychee works especially well in martinis, mixed with vodka and vermouth, and paired with other fruits, like lemon, coconut, or melon. 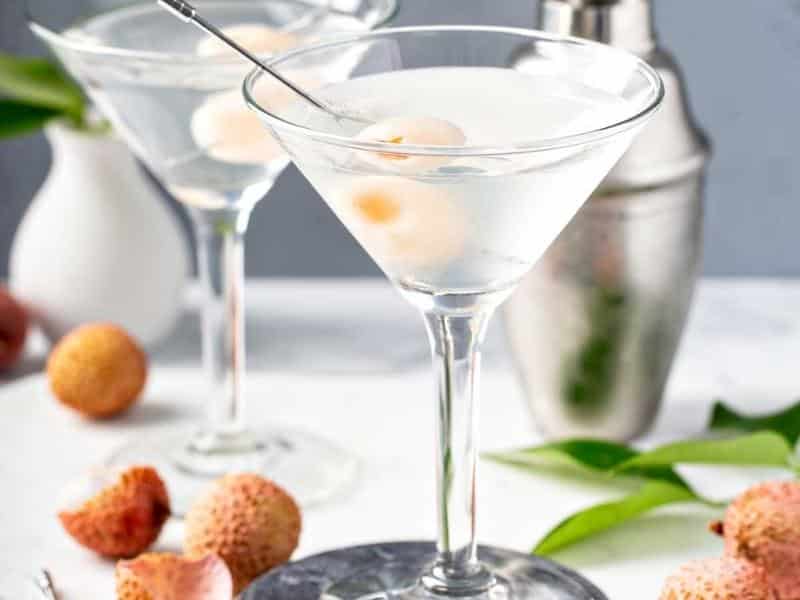 In a shaker, mix 1 ounce of lychee juice from a can with vodka, lychee liqueur, a splash of lime juice, and ice. Shake well for around 30 seconds, then pour the mixture into two martini glasses. Take out two lychee fruits from the can and place one in each of the martini glasses. Top the cocktails with sparkling wine or champagne, decorate the rim of the glass with a slice of lime, and serve. 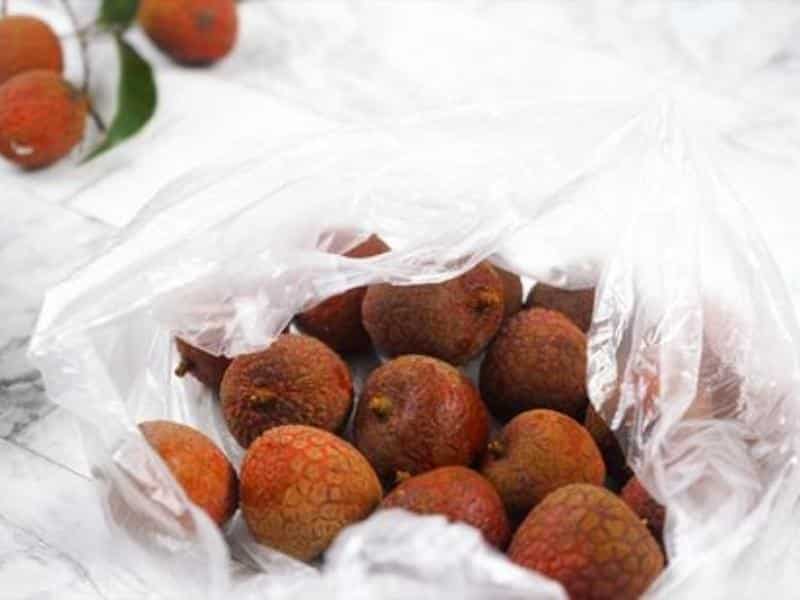 Lychee season in the US starts in late spring and ends in late summer. Fresh ripe lychee should be stored in a fridge for 5 to 10 days, or two to three days at room temperature. In the fridge, lychees are best kept in a plastic bag or closed container, and the fridge should be kept at around 40°F. Lychee can also be frozen, but only with its peel still on.

Dried lychee can be stored for up to one year at room temperature. Canned lychee keeps well for six months, but once the can is opened, the fruit should be eaten in the next two to three days.