Having a potato salad on the dinner table is quite a usual thing. It’s a great side dish because it can fit well with almost anything and you can serve it at a party, a barbecue, a family celebration – whatever you may think of. It’s easy to whip up in a flash, and anyone can make it so it is a great extra to throw onto the dinner table and most people will like it.

There are a lot of different recipes for potato salad, but the cornerstone ingredient in most of them is mayonnaise – lots and lots of mayonnaise. Without it, is it even real potato salad? Some people would say that it isn’t.

Still, there are people who simply can’t stomach mayo, whether because of health concerns or various other reasons. In that case, what can you do? You can’t make a potato salad without mayo – or can you?

Well, yes you can, and it can be almost the same as it is with mayo. Don’t believe us? Well, here are some science & recipes that will prove our point.

Why Make A Potato Salad Without Mayo? 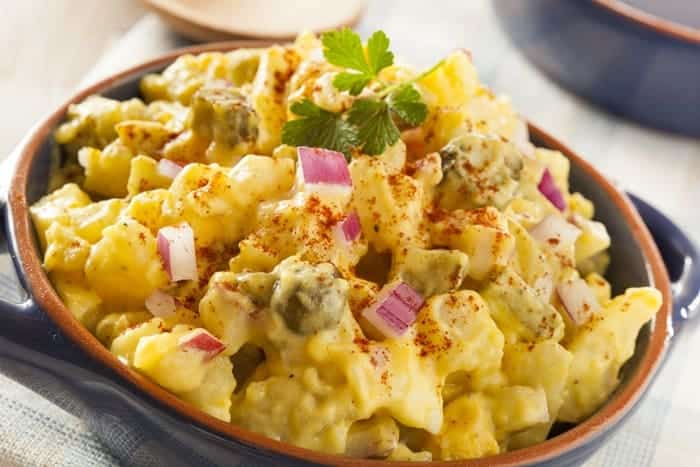 One of the main reasons for making a potato salad without mayonnaise is if you’re a vegan. As you know, mayonnaise is mostly made from chicken eggs, making it completely incompatible with a vegan diet. However, you might still want to enjoy a creamy and delicious potato salad regardless, so this is a nice solution.

Another reason comes in the form of health concerns. Mayonnaise contains a lot of calories and a lot of bad fats so it can be bad for your health, especially if you have high cholesterol or high blood pressure. In that case, you should avoid mayo due to how unhealthy it can be, but a nice potato salad without mayo might still find its way onto your menu.

If you’re trying to lose weight, eating something with copious amounts of mayo in it also might not be a great idea, due to the number of calories it contains. In that case, you can still have potato salad just without the ingredient that makes it so fattening.

The last reason is if you simply don’t like mayo and don’t want to be anywhere close to it. That is understandable; there are people who don’t like certain foods and just can’t stand them but might still want to experience dishes that contain them. Making a potato salad without the mayonnaise is a great alternative for those sorts of people.

You will find a surprising amount of different potato salad recipes out there, and a lot of them contain no mayo at all. However, some of them aren’t quite up to snuff and are just normal recipes with the mayo removed – that doesn’t make for a satisfying potato salad. Here are some recipes that don’t contain mayo but are equally as delicious as the ones that do.

This is a nice alternative to a mayo-based potato salad which is easy to make and has a unique flavor. It is great for people on a diet and is exceptionally healthy and tasty – it has everything you would want out of a dish like this.
Print Recipe Pin Recipe

As you can see, this is a recipe that can be done in under an hour and requires almost no effort at all. It’s great for everyone, even people who prefer their potato salads with mayo and it has a nice lemony flavor that sticks out when combined with the mint dressing.

This is a nice and hot potato salad that doesn’t require a lot of ingredients or complicated preparation. In its regular form, it’s not vegetarian-friendly, but it can easily be modified if needed.
Print Recipe Pin Recipe

There you go! Now you have a tasty potato salad that is easy to make and has a lot of texture. It is high in fat and not suitable for vegetarians, but that is solved by removing the bacon from the recipe and substituting it with something else. Imitation meat or tofu does the job equally well.

This potato salad is a great side dish that can be served with almost anything. However, it is also hearty enough that it could be a full meal on its own. It’s well-suited for those on a vegetarian diet, and it’s filling while also feeling quite light and easy to eat.
Print Recipe Pin Recipe

As you can see, this salad can be quite a decent meal on its own, and you can make it for lunch or dinner if you like since it is quite light. Despite that, it will make you feel full and satisfied while tasting great and spicy. You can modify it to your liking by adding some additional spices or replacing some of the ingredients in the dressing – be creative.

There you have it; those are the best potato salad recipes – sans mayo – that we could find right now. Each one is great in a different way and will be able to satisfy most people, even those who like their potato salads with tons of mayo. Each of the recipes is also quite easy to modify to your liking, so you can experiment and create something you might like even more. If you do have a favorite recipe for a mayo-less potato salad, feel free to share it in the comments. We hope you liked this article and that you will read some of our other articles as well. Have a good day and good luck cooking!