We all have experienced encounters with spoiled meat: whether we walked a questionable piece of meat around to our family members to have them smell and assess; rinsed off the meat and then examined the smell, color, and texture; or gave it a shot and cooked it, only to determine after taking a bite that the meat was, indeed, spoiled.

Determining the main causes of meat spoilage allows us to prevent it from happening. We can explore the major issues without engaging in a full microbiology course. The main cause of spoiled meat is heat, and that is because the presence of heat is a catalyst to all the main reasons that meat spoils.

What happens when an animal is slaughtered for consumption? After death, cells no longer regenerate, so the existing cells begin to break down and the meat begins to spoil. This deterioration is inevitable, but heat and light accelerate the process significantly.

The growth of microorganisms fundamentally alters the structure and chemical properties of meat. These microorganisms break down fats and proteins, causing changes in the meat’s smell, appearance, and texture. These physical changes are indicators that the meat should not be consumed and are evidence that eating the meat can cause serious health issues.

Foodborne illnesses are nothing to be trifled with; the World Health Organization (WHO) estimates that globally, 420,000 humans die from unsafe food every year, and 600 million humans get sick. Spoiled meat contributes to these staggering numbers.

Bacteria and mold are by far the most common microorganisms that cause meat spoilage and heat is the most powerful conductor for both. 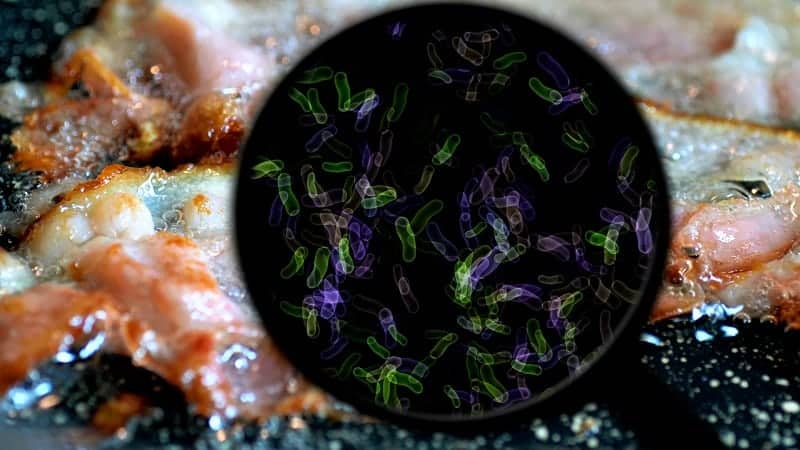 Bacteria might have been living in the animal when the animal was still alive. When the meat is exposed to heat, it’s like a lit match and the bacteria grow and spread like wildfire.

Additionally, bacteria can get on the meat after an animal is slaughtered, either from contamination in handling or from knives or surfaces used during the killing of the animal. In this case, the bacteria jump from the contaminated area to the meat.

Again, exposure to heat causes rapid growth of the bacteria that destroys the integrity of the meat and causes it to become rancid.

Signs and Symptoms of Bacteria Spoilage

Bacteria colonies, which can double in number in only 20 minutes when exposed to heat, identify themselves with a sour, sulfur-like smell. If you don’t catch the scent beforehand, you’ll notice when you take a bite that the texture is chalky and you’ll likely be able to tell that the taste is rotten.

Indicators can include the following: 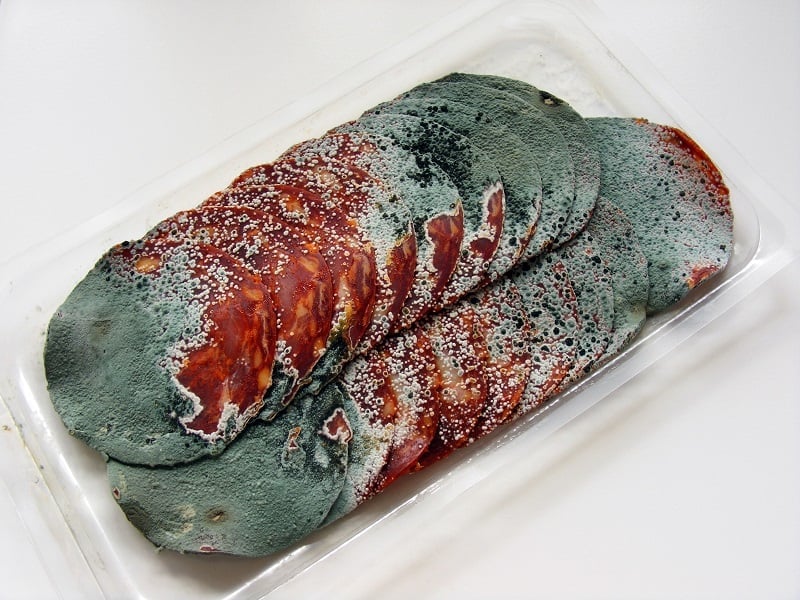 Heat creates moisture, especially when meat is packaged in a way that is not airtight (this is why many people prefer food vacuum sealers that remove excess oxygen and moisture.) When there is too much moisture present, mold takes a foothold on your meat, feeling free to grow and multiply across the surface of the meat.

Again, heat is the conductor that allows mold to rapidly multiply and spoil your meat.

Signs and symptoms of mold spoilage
Heat, heat, heat and moisture, moisture, moisture. For mold, it’s all about the warm, moist environment that will colonize your meat faster than you can blink. Mold is super easy to see with its fuzzy greenish texture crawling all over the surface of your meat.

Indicators can include the following:

Other Types of Spoilage

Oxidation
Oxidation is a chemical reaction that leads to rancid meat. Oxidation occurs when food is not packaged properly and the oxygen and moisture react with the fat naturally present in the meat and then the meat spoils.

Certainly, as we know that higher temperatures create moisture, as heat accelerates the oxidation process.

Signs and symptoms of oxidation spoilage
When meat fat interacts with the oxygen, the resulting alteration will be evident by a sour smell, change in color to greenish-brown, and an obviously spoiled taste. You might notice a slimy film on the meat during oxidation.

Note: Not all oxidation means your meat is spoiled. Meat often starts to turn brown while it’s still good to eat. Make sure you smell it and look for slimy coating. If it smells OK, it could still be edible.

How Hot is Hot?

Pro tip: Some deli meats, ham, and bacon have nitrites added and the high salt content may allow you to keep them in your refrigerator longer than raw meat, but these meats still are bound to the temperature rule.

Note that many types of deli meats today are uncured or have no nitrates added. While this is a healthier option (sodium nitrate increases your risk of cardiovascular ground beef, lamb, veal, and pork: minimum internal temperature of 160 °F (71.1 °C)disease), uncured meats have no preservatives, so they will spoil more quickly than their cured counterparts.

A Final Note on Heat
While exposure to heat stimulates bacteria and mold growth, heat also helps us eat meat without getting sick. Always cook meat and poultry at a minimum oven temperature of 325 °F (162.8 °C).

It’s important to understand why heat is such a superconductor for bacteria, mold, and oxidation which destroys healthy meat faster. With a solid knowledge of safe temperatures for meat preservation, you can make sure your meat stays fresh as long as possible. You not only save money, but you also decrease your carbon footprint by throwing away far less food.

And more importantly, preventing the spread of microorganisms decreases the chance that you or your loved ones will become sick with foodborne illness, which is uncomfortable and painful at the least and in extreme cases fatal.

Keeping our loved ones safe is always our top priority, and being armed with the right information helps us do that.