Peach is one of my favorite fruits. It’s juicy and delicious. Many would agree that it looks like an apple except for its skin. The skin is hairy which makes a lot of people refuse to eat it. But can you eat the peach skin? Is it safe to do so? I will admit that […]

Eating hamburgers have become a staple part of our daily lives. It is hard to talk about grilling without including burger patties. Afternoons at the backyard would be incomplete without a batch of patties and sliders. For us that have busy lifestyles, it is very hard to find a way to make patties all the […]

Chicken is the one meat that I can’t live without. I always have one in my freezer. And my kids love it, too. I am sure that many of you reading have the same sentiments. Who doesn’t like chicken? There are countless of ways to cook it. It’s packed with protein. And yes, it is […]

Shrimp is delicious, nutritious and versatile. There are countless recipes to cook it. You can sauté, roast, grill and bake it. What’s more? Shrimp is very easy to cook. You don’t need more than 10 minutes to cook it. It’s not surprising that shrimp is one popular type of seafood. I won’t be surprised if […]

Many, many years ago, before canola oil, vegan butter, and extra virgin olive oil became widely used around the world, lard was the cooking fat that people used a lot of. While lard has taken a backseat, there are still old-school chefs who prefer to use it. And why not? Lard is a very versatile […]

Are you just learning to appreciate seafood? Then one of the seafood that I can recommend is scallops. But you would likely ask “what do scallops taste like?” Would you even like it? And how nutritious is this seafood? I know that scallops aren’t exactly the cheapest food. Maybe that’s one reason why you haven’t […] 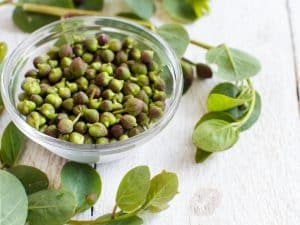 Capers taste like green olives with a hint of lemony aroma and a smack of tartness. Capers are packed in brine or salt, so they have an intense salty, tangy, and savory flavor that gives depth and aroma to different types of dishes. Green in color, capers are tiny orbs the size of a corn […]

Years ago, I chanced upon a recipe for a Scotch broth. It looked very enticing so I decided to give it a try. But when I saw the ingredients list calling for diced swede, I stopped and asked myself “what is this?” Have you also experienced this? Are you still at a lost on what […]

If you are not that familiar with water animals, you may actually mistake an eel for a snake. With its weird face and slimy body, would you believe that this fish is sought after all over the world? A kilogram of eel meat can cost as much as a thousand dollars. What does eel taste […]

Flour is an ingredient that is quintessential in baking. It’s also used in many recipes, such as Easter cookies and homemade Cheerios. But have you ever bought flour and realized that it was too much for a recipe that you were working on. Then you ask “does flour go bad?” I’ve also been in your […]